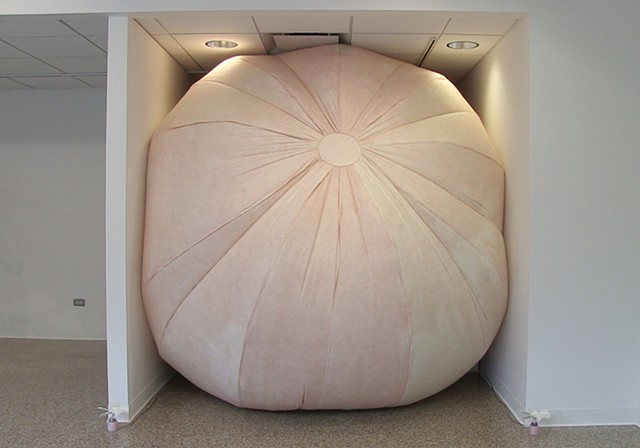 Luftdruckschwankungen inflates at an almost imperceptible rate, to the point where it exerts pressure on its seams and on the alcove where it’s corralled. Then, very gradually, quietly, it sags and slumps down until it’s just three-quarters of its original size. This process takes eight minutes. Then its tiny fans on the floor nearby begin to turn, and the process starts over again.

For me, the voice and body of this sculpture parallel my experience of managing expectations and weathering disappointments on a daily basis. The resurrection of hope, over and over again, is both heavy and light. Its German title sounds to me like it weighs a ton, yet it translates to mean, simply, “air pressure fluctuations”. Installed at Loyola, the sculpture was almost invisible from the gallery’s entrance. I liked that it could be enormous and yet invisible, the proverbial “elephant in the room”.